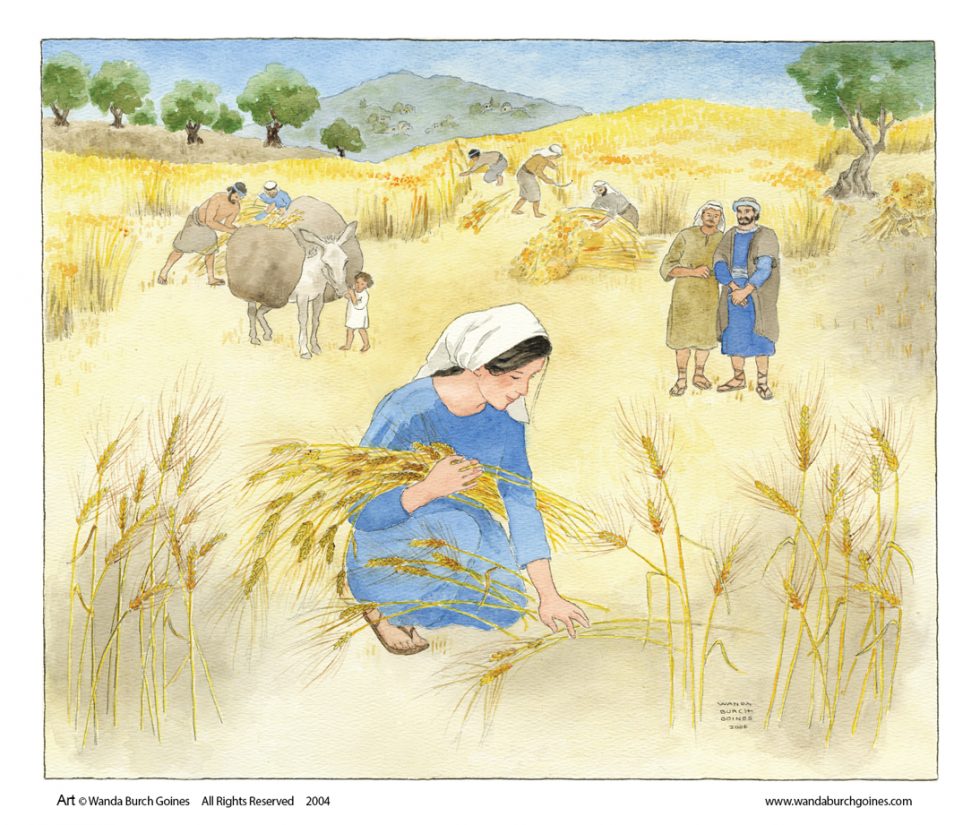 My name is Ruth, and I want to tell you how I learned to rejoice in the Lord, and how He blessed me because of it.

I was born in Moab. This is a little land east of the Dead Sea, with rich pastures and grain fields, and many flocks of sheep and goats. The land of Israel, where the people of God live, is west of Moab over the River Jordan.

I was always very curious about the people of God. I knew we, the Moabites, were distantly related to them. My people were descended from Lot, who was the nephew of the great Abraham, father of the Israelites. Lot came with his uncle from Ur of the Chaldees, far away to the East. But Lot didn’t stay with his uncle, moving to Sodom, and years later, when Sodom was destroyed by Abraham’s God (they said this was because it was so wicked), Lot and his two daughters fled to a cave by the Dead Sea, where they both had sons by their father. One of those sons was named “Moab”.

My people had never been ashamed of their beginning but bragged about it. We didn’t worship Abraham’s God in any way and paid no attention to the moral laws He insisted His people keep. Chemosh was our god, and we were very afraid of him, especially when there was trouble in the land, and we were threatened with famine or sickness or war. At those times we sacrificed our children to him. This was hard on their mothers, but we all knew it was necessary.

When I was in my teens, a famine struck Israel. Many of the families across the river migrated to Moab where there were plentiful crops. Everyone in Moab then said that Chemosh was greater than Israel’s God, because WE didn’t have a famine, and they looked down on the immigrants and pitied them. But some of the Israelites felt that God was judging them by sending the famine, and they refused to worship Chemosh, praying instead that Israel would do right and obey their God. And they waited for the famine to be over so they could go home again.

One of these families moved near ours, and we got well acquainted. They had two boys about my age, Mahlon and Chilion, and the father Elimelech and the mother Naomi were most kind to me. They were serious about their faith, and talked about their God – – how great He was, how He had made heaven and earth and the sea and all that is in them all over the world, how He ruled everything, (and I was envious, because Chemosh only ruled Moab, and he certainly didn’t claim to have created it), and how He had promised a Saviour and Redeemer Who would come someday from their people. Every Hebrew girl, Naomi told me, hoped SHE would be the mother of this Messiah: and their family belonged to the line through which Jacob, one of their ancestors, had prophesied the Messiah would come!

The more I heard about their God, the more I wished He were MY God, too. And I envied the people of Israel because they had been chosen by their God, and I had not.

And then, one day Elimelech died. I think I cried as much as all the rest of the family put together, and instead of ME comforting them, THEY all tried to comfort me. Of course, they missed him, but they said Elimelech had gone to be with the father’s, and with their God, and when they died, they would go to be with Him, too. They had hope through their tears and didn’t howl and mourn or cut themselves like my people did when someone died.

I think it was at this time I began to realize how kind and considerate Mahlon was. He truly loved his father and was tender and helpful to his mother. He had never been strong, or really well, but he didn’t complain and was always cheerful. And I fell in love with him. Oh, what a wonderful day it was then Mahlon asked my father if he would allow me to marry him. My parents weren’t really happy about this, because Mahlon wasn’t a Moabite, and they considered him rather strange, but they saw there was no one else I wanted to marry. So somewhat reluctantly, they said “yes”.

We had only a few years together. Mahlon grew weaker and sicklier. He knew he was dying, and tried to comfort me, and assured me he was not afraid because soon he would be with Elimelech, and he would see God. One dreadful day he died. And within that year the other son Chilion died also.

Now Naomi was alone except for me, and Orpah, Chilion’s widow. She felt she had nothing left after being in Moab for nearly ten years – – no husband, no sons, no grandchildren, so she decided to go back to Israel. The famine was over, and she couldn’t bear to stay any longer in Moab with all those memories. Orpah and I packed our belongings to go with her, and we walked sadly towards the land of Judah, where Naomi had been born.

I’ll never forget what happened next.

At the border, Naomi stopped and said for us to go back. She prayed the Lord would find each of us another husband because she was too old to have any more sons who we might marry. (It was the custom in Israel for the younger son to marry the older son’s widow, to continue his name in the family). Naomi was really very discouraged, and we all cried together, there on the road. “The hand of the Lord has gone forth against me,” she said. Then Orpah kissed Naomi, and turned around and went back home, crying as if her heart would break.

But you know, I COULDN’T leave Naomi then! She had become dearer to me than my own mother, and she didn’t have anyone at all left, but me. I put my arms around her, and she urged me to go back, as Orpah had done. She said, “Behold, your sister-in-law has gone back to her people and her gods; return after your sister-in-law.”

And when she said that, I suddenly realized that they in Moab were no longer MY people. I no longer believed in what they believed; I no longer agreed with the things they did; my own family considered me a foreigner for marrying an Israelite, and I hadn’t visited my former friends in years. At the thought of going back to worshipping Chemosh and the whole family of cruel gods of Moab, my heart nearly stopped. Chemosh was NOT my God anymore! The God of Israel was my God, and I would do anything, go anywhere, to be with Him.

So I threw my arms around Naomi’s neck, because she was the only link I had with the true God, and I loved her. And I remember crying out, “Do not urge me to leave you or turn back from following you; for where you go, I will go, and where you lodge, I will lodge. Your people shall be my people, and your God, my God. Where you die, I will die, and there I will be buried. Thus may the Lord do to me, and worse, if anything but death parts you and me.”

When I had said that, I KNEW the mighty God of Israel had looked down on me, a woman of Moab, and had said, “I accept you as Mine. He didn’t say it out loud, of course, but I KNEW it. And Naomi must have known it, too. She didn’t say anything, but she hugged me with her eyes full of tears, and then, for the first time in a year, I saw her smile.

And from that moment on, I was sure that everything was going to be all right!

After that, the Lord did great and wonderful thing things in my life. We went back to Naomi’s hometown, Bethlehem. He guided me to glean grain in the fields of a wonderful man named Boaz, a close relative Elimelech. He didn’t have any prejudice against me, even if I had come from Moab, though this may have been because his own mother had been a Canaanite named Rahab. And before long he married me, and God blessed us with a dear little son. Naomi had never been a grandmother, and her little grandson brought much happiness to her. She wouldn’t let anyone else be his nurse!

Most wonderful of all, my husband was in the family who bore the promise of the Saviour of Israel, and we knew that through the line of our son, whom we called “Obed”, or “Worshipper”, God’s own Son would eventually be born.

All of these things brought me great happiness, great joy. But the greatest joy I had was in the Lord God of Israel. I have rejoiced in Him from the moment He became my God because even if He had done nothing else for me, THAT WOULD HAVE BEEN ENOUGH.